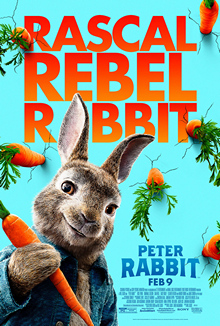 It's time for Peter Rabbit to get the cinematic treatment, and to be honest I'm surprised it hasn't been done sooner, the first story came out 106 years ago, after all. But hey, we've finally made it, a Peter Rabbit movie, featuring James Corden as the titular bunny, which I'm sure will sound like a dream to some and a nightmare to others. I'm guessing this was developed hot off the tail (no pun intended) of Paddington to cash in on some of that old school success. Still, Paddington, and its sequel, are absolutely charming, so I held out some hope that this would be decent.

So Peter Rabbit is a rabbit, and Peter and his rabbit family like to break into Mr. McGregor's garden to steal his vegetables. That's the gist of the original story, and it's very much the gist of this film. To be fair, they've padded it out quite a bit with various escapades and a bit of characterisation, but in the end it doesn't amount to much more than a Wile E. Coyote style back-and-forth garden warfare picture.

So yes, Peter Rabbit is quite thin on plot, but it does make up for it some way with its charm. The animals are all beautifully rendered, and there are some decent laugh-worthy moments, with some nicely choreographed action sequences. The characters themselves are a little one-dimensional, but I did find myself chuckling at quite a few of the jokes and visual gags that cropped up throughout. I mean, there's a lot of them, so I was bound to find some of them funny, but some of them do miss the mark.

Cast-wise, I can't say this is anything special, James Corden is just plain old James Corden, he's not as annoying as you might be expecting, and he does a decent job as the lead. Otherwise, everyone else is passable. Basically, Peter Rabbit is just very middle of the road. Nice to look at, with a few good laughs thrown in, but not particularly fleshed out. A decent enough family film, but it's not a patch on Paddington.