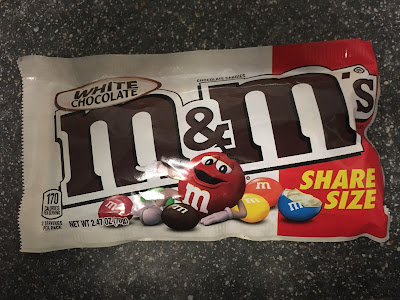 I found an import sweet shop while I was out and about today, and the selection on offer was pretty staggering, there was a lot of stuff that even I haven't tried. I was like a kid in a candy store. Among my many purchases were these white chocolate M&Ms, which I've never even heard of, let alone seen, so they were pretty much the first thing in my basket. It's a fairly sizeable pack, which is share size, but we all know that's only a suggestion.

So yeah, basically these are like chocolate M&Ms, but with white chocolate instead of the milk stuff. But there's nothing basic about these. They're pretty big, I'd say they're on par with the Crispy M&Ms, falling just short of peanut size. The stuff inside is pretty great, a nice creamy white chocolate, that's almost on the same level as Milkybar. The crispy shell gives it that same satisfying crunch as always, and I'd say the experience is extremely close to those Milkybar mini eggs you get around Easter, and that's only a good thing. These are some sizeable M&Ms with a satisfying crispy shell and a good quality white chocolate. You can't go wrong with these, I suggest you track them down.