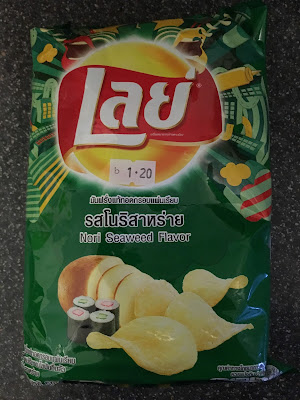 I found this interesting little bag of Lay's in my local Asian supermarket. they're flavoured like the seaweed you get wrapped around pieces of sushi. Oddly specific, only going for the wrap rather than the stuff inside, but it was definitely far enough out there for me to grab the bag straight away. So basically, these aren't particularly flavoursome, they're satisfyingly salty, with a definite hint of something seaweed-like. I wasn't a fan at first, though it grew on me, providing a semblance of a sushi experience, though not enough to make them particularly good. An interesting attempt at a flavour, to be sure, but this is a pretty average bag. I'd be interested to see which other flavours of Lay's hail from Asia.