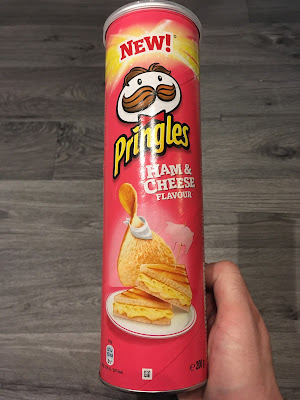 After trying out the jalapeño Pringles the other day, I had to go back and pick up this other flavour, especially since they're now both half price at Tesco. This may not have piqued my interest as much as a spicy can of Pringles, but with that nice little picture of a toastie on there I couldn't help but be tempted.

I'm glad I went for the jalapeño first, these are alright, but they're not exactly a good balance of ham and cheese. The ham is at the forefront, and is pretty strong, and while it's not exactly authentic it's a pretty nice flavour. I can't say the cheese is overly noticeable, so this is more of a plain old ham, but there is a little something in there that gives it a bit of a different flavour. A very porky can of Pringles though, so if you're into that then pick them up. I don't think I'll take the plunge again, they're pretty average.