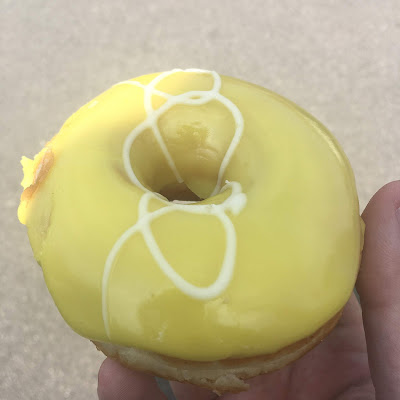 I popped into Greggs for the first time in a while, to get a hit of that sausage roll goodness. Of course, the doughnuts were there too, just begging me to eat them. They were all out of the limited edition of the moment, but I figured I'd go for this one. It's not just a generic lemon doughnut, it's a lemon sherbet one!

So basically it's a lemon doughnut with a little sour hit to it. I mean, it's a good idea, but in execution its' pretty underwhelming. The topping is nice, a nice lemon glaze with a certain tartness, but it doesn't last all that long. Underneath is just a dry ring of dough, it could have done with a bit of filling, but instead it only served to disappoint. A pretty mediocre doughnut, I wish I'd gone for something else.