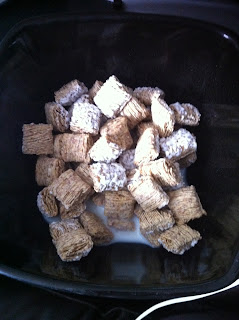 We went to Sainsbury's Jubile Family Festival last weekend, despite the crappy weather. It wasn't bad, especially since there were various food tents around offering free samples. Paying a visit to the Rice Krispies tent rewarded us with a box of Mini Max for some reason. I thought it was a new cereal, seeing as it said "NEW" on the box, but apparently they're not all that new. Still, I've been eating them for the past few days.

They're pretty much like bitesize Shredded Wheat, but with a generous sprinkling of sugar on top. I am not a fan of Shredded Wheat, but these aren't half bad. They don't come apart into strands like Shredded Wheat, and the sugar is just enough to give it a nice kick, while still making me feel like I'm beaing healthy. Sure, they're nowhere near the nicest cereal around, but if you're after a healthy-ish cereal that you don't have to choke down, give these a go.