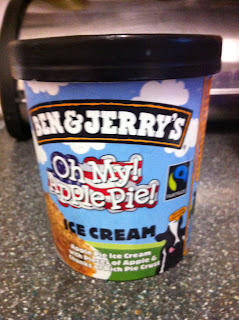 I've been waiting for this to be on offer for so long. Well, it wasn't particularly cheap anyway, 2 tubs for £6, but I'm tired of waiting, so here it is. Oh My! Apple Pie boasts apple pie ice cream, with apple chunks and pie crust all mixed in. Sounds awesome. Tastes awesome.

The apple pie ice cream is good. You'd think that something so strangely flavoured would be a bit overpowering, but it's simply smooth, with a delicate apple pie flavour, which is really kicked up a notch when you find a piece of something. The apple is your standard apple pie fare, and is rather tasty, but the pie crust pieces are thick and crunchy, exactly how I like it. It's like Ben & Jerry came up with an awesome apple pie recipe they could easily sell on their own, but they just decided to cut it up and dump it in some ice cream. Well, I'm not complaining. This could easily be one of my favourite flavours of all time.