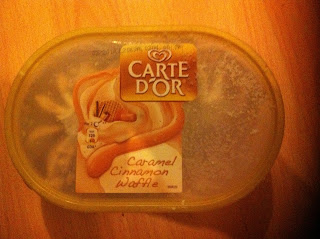 I've stated my dislike for cinnamon several times before, but I don't know, maybe it's starting to grow on me, especially when mixed with desserts. I'm partial to the odd cinnamon roll, and while buying ice cream yesterday I was drawn to this interesting flavour.

It certainly has caramel, cinnamon and waffle, so no false advertising here. The combination of flavours is actually pretty nice, and it all has that signature smoothness that you find with other Carte D'or varieties. There is perhaps a little too much cinnamon for my liking, I would've preferred a larger ratio of caramel, or even the waffle, which only covers the very top. But all in all it's an interesting flavour that's quite well done.