Today's Review: The Rabid Response To Fifty Shades Of Grey 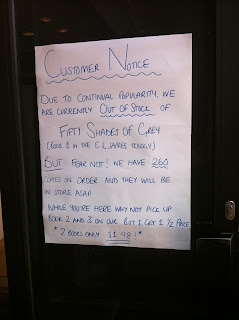 This did it for me. I've been letting the massive success of this book pass somewhat under my radar, but now I find out that my local Waterstones has completely sold out. It's crazy. Well, I guess you wouldn't want to buy it used. Ick.

For those of you somehow not aware of the Fifty Shades trilogy, it is a series of books in which a young innocent virgin, Anastasia Steele (what an awesome yet horrifying name), is targeted and stalked by mysterious billionaire Christian Grey. Finally he persuades her to let him sex her up in all kinds of wonderful ways (BDSM, oh my!). While it sounds like something you might see on Crimewatch, since this is novelised it's, like, the best thing ever, 'cause Christian Grey sounds really hot and this corrupted young woman is definitely completely into it of her own accord.

So come on, calm down ladies. It's just a book. You should try the real thing sometime.