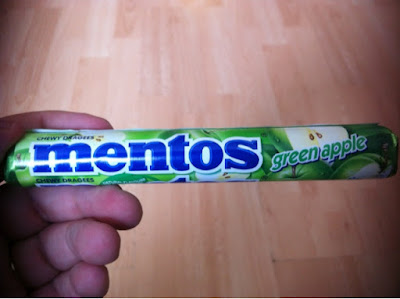 There's a Polish supermarket that's just opened up nearby, so of course I went in hunting for some interesting foodstuffs. Well, just sweets and crisps really. But I stumbled upon some green apple flavour Mentos, alongside the regular minty and fruity varieties.

There's not too much to say. They're just like any other Mentos. The flavour though, is awesome. It's slightly tangy, wonderfully fruity, they were wolfed down with some speed. They're a great addition to an already fantastic range.