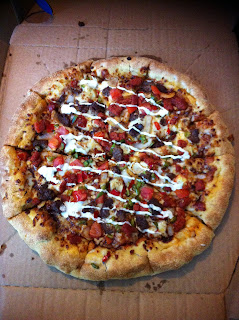 Perhaps I should have given up on hot Domino's pizzas after their insane Meltdown a couple of years ago. That baby made my stomach cry. But now we have a much more mild addition to the menu. It's the Mexicana series, paying homage to that Mexican food you probably have instead of ordering pizza sometimes. The Mexicano comes in chicken, beef, or vegetarian (you know, if you hate yourself). I chose the beef, because I am a big manly man. The toppings also include a generous helping of chorizo and the various generic peppers that people chuck into things to make them hot. Plus a little drizzle of sour cream for presentation.

It's pretty nice. Not too hot, at least for my tastes. I did start to feel the heat by the end, but I guess that's what eating a whole large pizza will do to you. The toppings were quite generous and evenly proportioned, there was a nice amount of chorizo piled on top, and that added a nice juicy kick to the regular beefy spicy flavour I'm used to.

Not only did I get the new pizza, I packed it out with the new crust, the aptly named Americano stuffed crust: 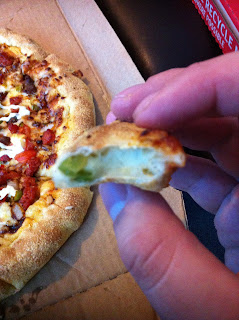 Yeah, dem's chillies in there. garlic and herbs too. Just when you think you've gotten to a soothing part of the pizza, it smacks you in the kisser again. It's a nice little kick, but all these different stuffed crusts appearing from time to time just make me wish they'd go for the logical end game already and make a crust that just has a whole pizza stuffed into it. I'm sure they'll get there by next year though.

If you're looking for something to burn your taste buds, I'm sure this will satisfy you to some degree. It's a nicely piled pizza with a pretty satisfying kick that you can also carry into the crust. Have it your way. Crap, that's Burger King. I mean "It's what we do". What a terrible slogan.