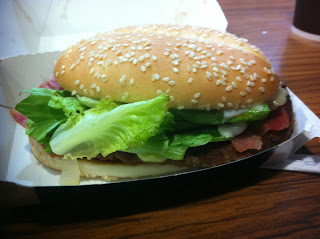 Well, that sure looks appetising. Just kidding, I'm not one of those people.

It's summer here in Britain, not that it's acting like it. But now that McDonald's has forced people to buy their regular burgers so they can get Monopoly stickers, it's time to roll out the "deluxe" burgers to last us through the remaining summer months. Since this is a year to celebrate Britain apparently, this burger promises the best of British. Which means having cheddar instead of American cheese, and different kinds of onions and lettuce I guess.

All in all it's not a bad burger. The patty is significantly more juicy than a regular one, I guess you get upgraded to the better parts of a cow for your extra dollar. The cheddar adds a nice kick as well, if you're used to your rubbery American cheese this is a nice surprise. The rest of the toppings are pretty generously piled too, the only thing is that it's perhaps a little too juicy. I felt a bit uneasy while eating it, thinking it may just disintegrate on my tongue. But hey, even if it did, I'd still enjoy it. It's a tasty burger.