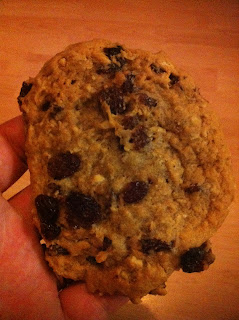 These guys get such a bad rep. They're seen as the losers of the cookie world. Why have oatmeal when you can have chocolate, or peanut butter, or caramel or toffee or some other unhealthy foodstuff? Putting raisins in cookies is some kind of huge turn off apparently. But I disagree. I am a fan of flapjacks, granola bars, and dammit I love oatmeal raisin cookies.

There's something just quite refreshing about them. The way the dough is rolled with the oats gives a fuller yet stickier texture which fills you up more than a regular cookie. The fruity kick the raisins give is refreshing, and hey, at least you can pretend you're being somewhat healthy.

Don't get me wrong, I love a chocolate chip cookie as much as the next guy. But I would certainly not turn my nose up at an oatmeal raisin. When I bake at home, I normally whip a batch of these up, it's hard not to. Plus I love my own more because I don't put in that dash of cinnamon that seems to have become the norm. But even with that they're still good. You hear that? I think they're awesome even with cinnamon in. Now that's a good cookie.