My kids have been taking part in the library's summer reading challenge, because apparently instead of being outside enjoying the nice weather, they should be inside reading books. Well, it's a nice opportunity to get them literate, so we've been picking out a few books from the dregs left by the other hundreds of children who are also taking part. I did manage to find one "classic" though, a book that I remember from my childhood. This is Not Now, Bernard, and it's horrifying.

We follow our titular character, Bernard, as he attempts to talk to his mother and father about something. Now, most parents may take the time to respond to their child, but not Bernard's parents. Instead, upon greeting his mother or father, he is met with the even more titular "Not now, Bernard!" 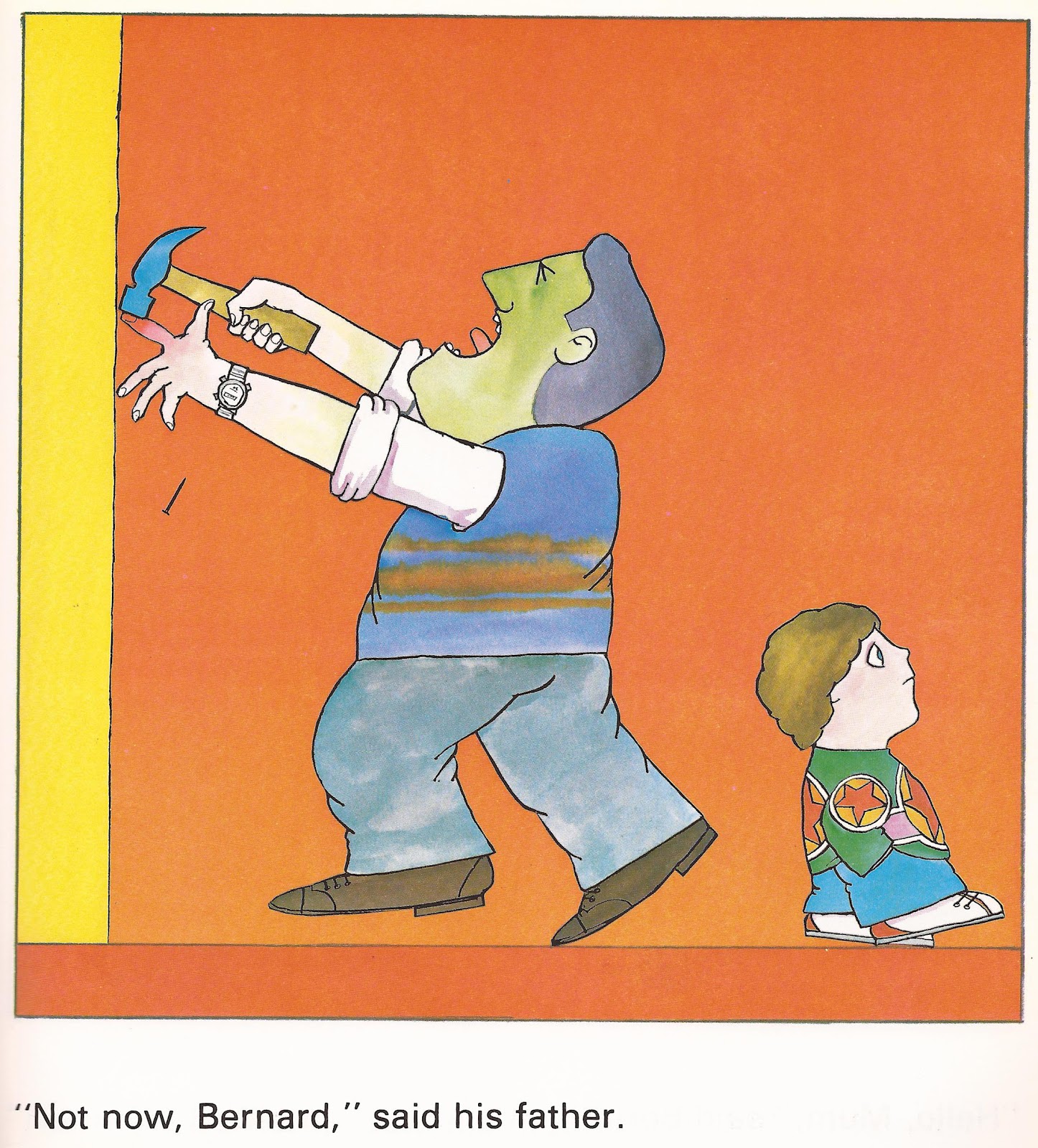 Alright, I get it, he interrupted you, but you could at least see what he wanted to talk about. Just look at Bernard's face as he shuffles away. He's used to this response, he's used to being flat out told to go away. He gets the same reaction from his mother, even when he informs her that there's a monster in the garden and it's going to eat him. Sure, he might be making it up, but the lady could at least take the time to reassure her son that there's nothing to worry about. But now, she'd rather just water the plants. Dejected, Bernard goes out to the garden and attempts to befriend the actual real life monster that's taken a pew on an oddly large rock. True to form, the monster does what Bernard predicts, it eats him. 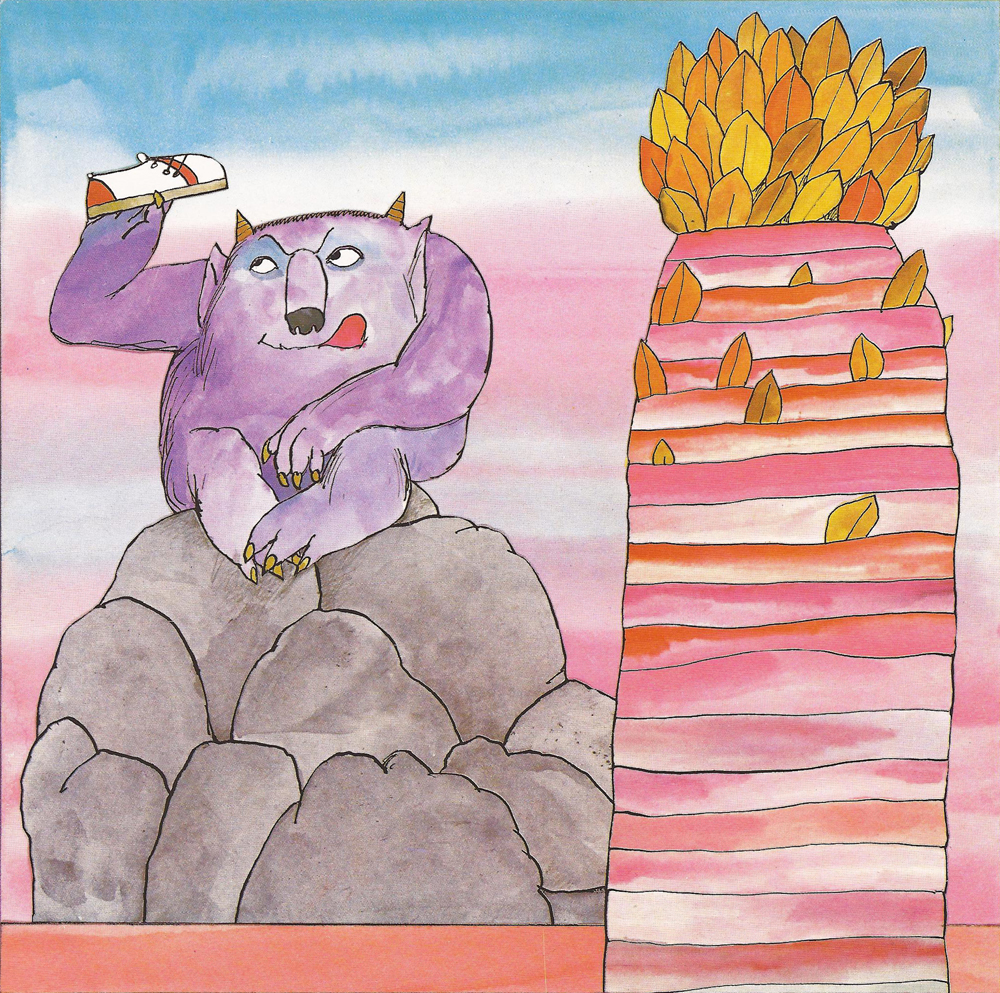 Reading this book the first time, you may think that this is some kind of trick. Bernard can't really have been eaten, maybe he's just sitting inside the stomach, waiting for someone to cut him out, a la friendlier versions of Little Red Riding Hood. But no, Bernard is dead. Not only dead, but devoured, massacred by a purple monster. All because his parents wouldn't talk to him. But the monster doesn't stop there, it wanders into the house and attempts to scoff the parents for dessert. Actually, probably the father for a main and the mother for dessert, I don't know how monster menus work.

Too bad monster, because Bernard's parents are so uncaring of their child that they just figure this purple horned beast is their son, and carry on ignoring him and telling him to go away. The monster, clearly fazed by such indifference, assumes the role of Bernard a little, reading Bernard's comic, eating Bernard's dinner, until the mother, still not even bothering to look at her child, sends the monster up to bed with a glass of milk. 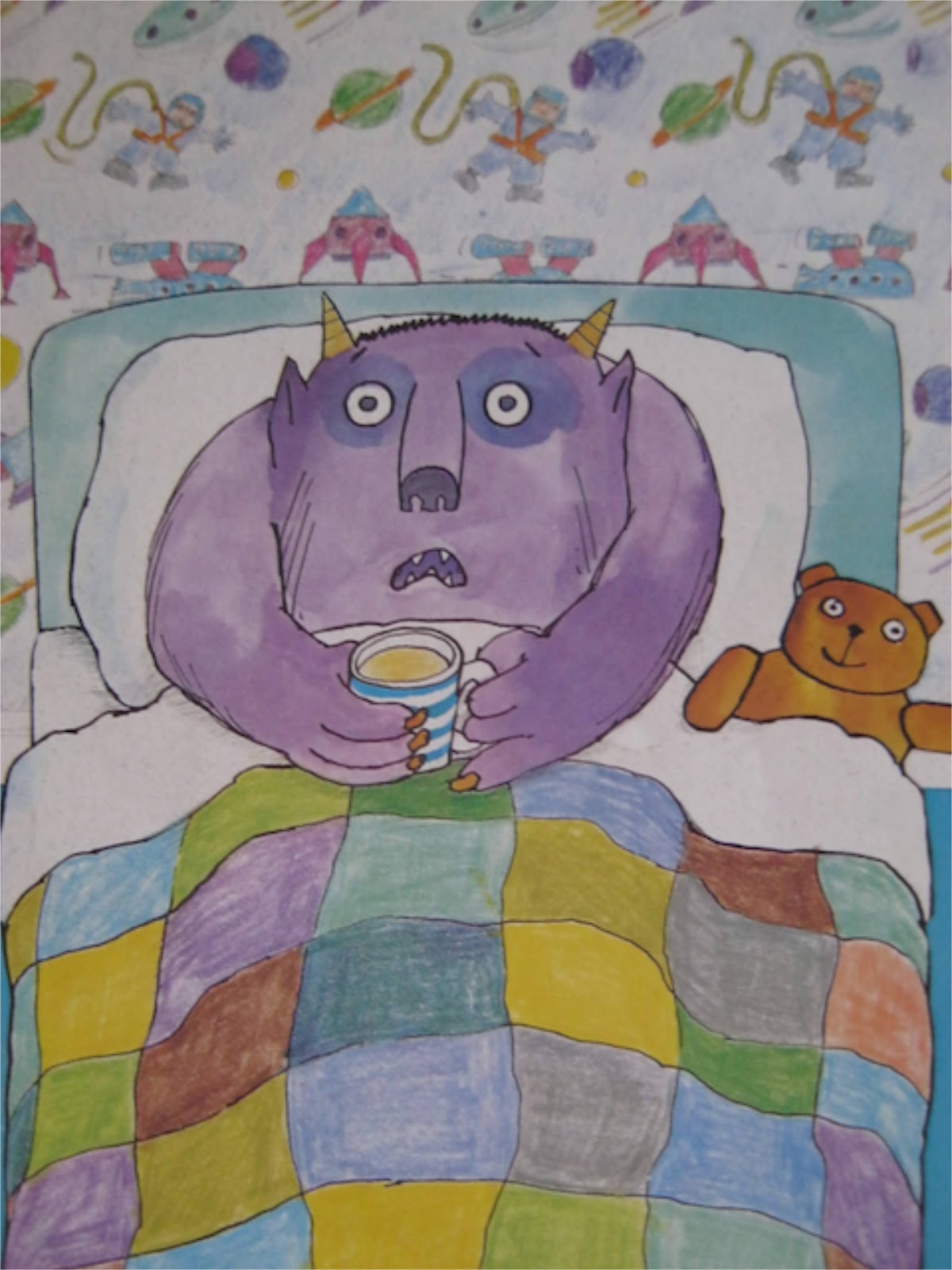 "But I'm a monster!" he cries. But who is really the monster? I mean sure, the monster is literally a monster, and a murderous one at that. But Bernard's parents truly are the monsters of this tale. They're neglectful, uncaring, and apparently their neglectful attitudes extend to their gardening, as they placed an inviting monster-friendly rock perch there and didn't bother dealing with the resulting monster guest. Bernard has been murdered in cold blood, and this mother and father don't even know, so wrapped up in their lives and chores that they still can't pay any attention to their "son". All Bernard needed was some love, some reassurance, probably a weapon to defend himself. But now he's dead, consumed, expired.

Not Now, Bernard is a harrowing tale of child neglect, a tale of the downfall of humanity, the consequences of our uncaring, selfish nature. But it's also a jolly fun read, and the kids love it. After all, we can't read into these things too much, can we?