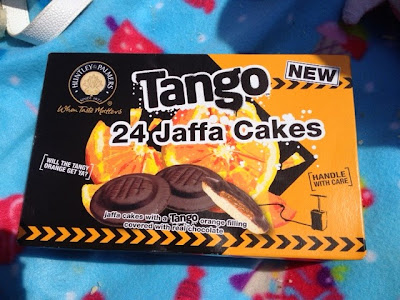 Yes, another Tango product has made its way onto my plate, or in this case, picnic blanket. Jaffa cakes are already known for their orange flavour, so mixing them up with Tango seems a good enough idea to me.

The box seems to be promising a lot, with a dynamite plunger attached to one of the cakes, and the phrase "Will the tangy orange get ya?" making it seem like these small, sponges discs are out to harm me in some way. So with the prospect of being beaten or blown to smithereens, I gingerly took my first bite...

...And was met with a Jaffa cake. Certainly not a bad Jaffa cake, but not a particularly special one either. I was expecting a nice tang that would hopefully assault my senses instead of my body, but instead it's simply a pleasant orange filling. Sure, it's not as nice as the McVitie's classic. The cake itself is quite soft, nowhere near as dry or crunchy as other inferior Jaffa cake brands, so this is certainly a good Jaffa effort. It's just too similar to the original, and not quite as nice.