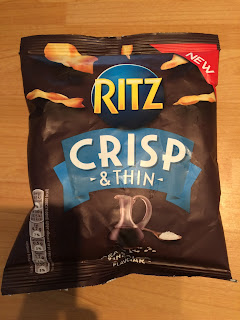 I was recently sent a selection of the new Ritz Crisp & Thin snacks to try out. I'm a big fan of Ritz, so I've been wanting to get my hands on these for a while. These seem to be a jump on the healthy eating bandwagon, which I certainly didn't mind, it stops me eating an entire box of Ritz crackers in one sitting. Crisp & Thin come in four different flavours: Sea salt & black pepper, sea salt & vinegar, cream cheese & onion and sweet red chilli. 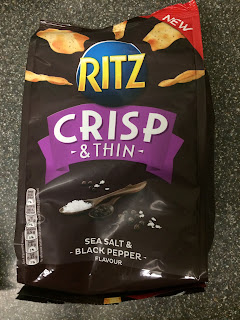 The flavours containing sea salt are a little odd. I was really looking forward to the salt and vinegar flavour, but the vinegar really is at the forefront, a very strong taste that certainly blocks out the salt. It's the same with the salt and pepper, the pepper just seems way too strong, and while the flavourings are pretty good quality, the balance is just off with these two. 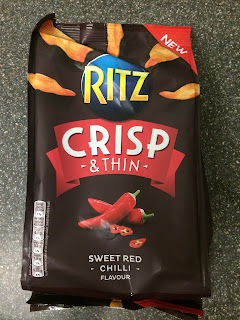 If you're expecting these to be like mini Ritz crackers, you might be a little disappointed. They are, indeed, crisp and thin, small, flaky bites that pack a satisfying crunch, but have more of a texture of Cheeselets than Ritz. I, for one, love the texture, these taste pretty light and there's enough surface area to pack in a lot of flavour. The sweet red chilli, however, doesn't capitalise on that. After the boldness of the salt flavours, I was expecting a big spicy hit, but I was met with a somewhat bland offering. There's a little bit of heat, and it's a pretty well rounded flavour, but just not strong enough for my liking. 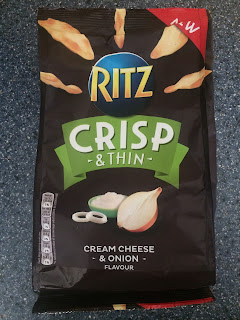 I've never been a fan of cheese and onion, but this flavour is probably my favourite of the four. Again, it seems one of the elements is overpowering the other. There's a hint of onion, but the majority of the taste comes from a lovely, bold cream cheese flavour, that's smooth and creamy and works very well with the texture of the crackers. I was prepared to write this range off as average, but this flavour brought it up another point. The flavours may be slightly off balance, but they're still some tasty crackers with an interesting texture that will look good in any party's sharing bowl. I probably wouldn't buy them full price, but I'll probably pick up some more bags when they're on offer.