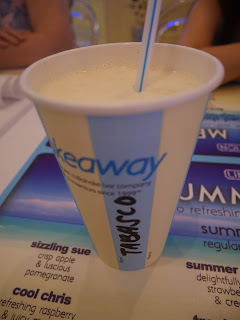 I'm in Oman at the moment, thousands of miles from home and completely steeped in a totally different culture. So of course I've been to a milkshake shop that's based in the UK. But hey, at least I went for something a little bit different. I was going to go for a good old peanut butter chocolate concoction, but then my eyes wandered over to a speciality shake that I was sure I would both love and instantly regret. It's a Tabasco milkshake.

Yeah, Tabasco sauce and milkshake. Why wouldn't someone put those two together? Probably because that would be insane. But as a lover of spice I certainly couldn't pass it up, and soon I was sitting down with my hot sauce shake. I suppose I can't fault this, it is literally a vanilla milkshake with Tabasco sauce mixed in. It starts out with a nice, creamy vanilla taste, but as soon as I swallowed the burning started in my throat, and the unmistakable flavour of Tabasco sauce crept in. It's not too bad a combination really, as long as you like both vanilla shakes and hot sauce. In fact, this is a pretty logical combination, as it's best to drink milk after eating something particularly spicy. The only thing I had against it is that as I was nearing the end of the shake the Tabasco started to win, it was probably a little too much to drink an entire shake, but I did manage to last due to the nice creamy shake. So no, it's not perfect, and it's not entirely refreshing. But if you want a Tabasco milkshake, ShakeAway is the place to get one, and a Tabasco milkshake is exactly what you'll get.