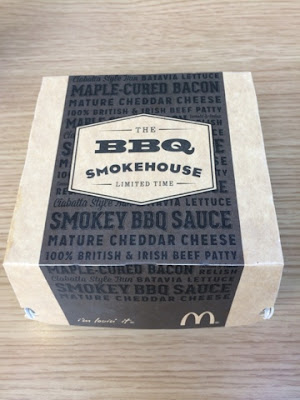 I always get excited about new fast food joint burgers, even if in essence they're all essentially the same. A different bun, some extra salad, added bacon, maybe even a different sauce. But hey, I was still willing to try out the BBQ Smokehouse from McDonald's. BBQ sauce isn't used as often as I'd like in their burgers (but then again I'd like it to be all the time), and this one seemed to promise smokiness to boot. Plus, look at that box. That's a darn nice looking box. 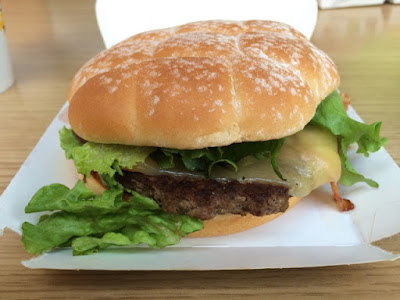 It's a darn nice looking burger too, to be honest. I didn't quite get it at a flattering angle, but it certainly looks better than your average Big Mac. The bun is a nice soft offering that easily gives way to the juicy contents, and there's actually a whole lot of nice stuff going on under the hood. The patty is one of the more quality ones you'll get at McDonald's, a big beefy burger that's nice and juicy. The bacon was quite plentiful too, so the carnivore in me was satisfied. The salad is a mixed bag. The lettuce is the floppy kind, which I guess is good for arty purposes, but the crunch of the red onion is pretty satisfying, and I think perhaps more crunchiness would have worked quite well. The cheese is okay, it doesn't really stand out against the meat or sauce, but that's fine, it's a good base. As for the sauce, that's where the burger shines. This isn't your regular BBQ sauce, it's a rich smoky one that really works together with the meat to deliver a great tasting burger. There's also a tomato and onion relish, which I was really looking forward to, but unfortunately it didn't quite come through in the taste. I got the odd hint of it, and it was pretty nice, but it could have done with a little more. As it is though, this a pretty good burger. The sauce is the main pull, and I'd definitely recommend it for that alone. A few elements may be a little off, but this is very enjoyable.