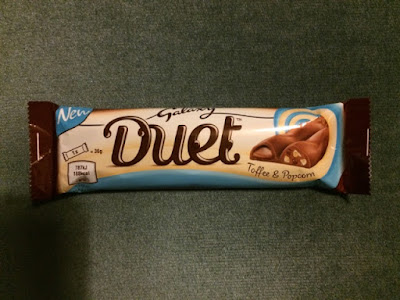 I've spent weeks searching for this. Weeks! Well, by weeks I mean two, and by searching I mean continuously popping into one newsagent that had been teasing me with a sign but no stock. But here it is, the new Galaxy Duet with toffee and popcorn. I liked the first two varieties, so I had no reason to believe this was any different. Besides, this one has two fillings I don't think we've seen before in a Galaxy bar, so I was raring to go. 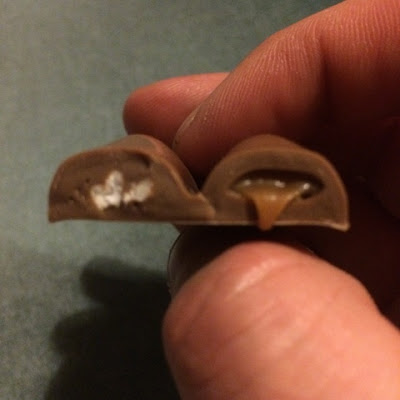 That picture may be more focused on my fingerprints than the bar, but you get an idea of the cross section here. There's a nice big cavity in one side, which houses a nice amount of gooey toffee. It's very sweet, and pretty delicious, possessing a darker taste and thicker consistency than the caramel you may be used to in a Galaxy. It's great, they should make more of it. As for the popcorn, it's not bad. I had no misguided preconceptions that they'd be able to fit entire chunks of popcorn in the bar, the size only leaves room for pieces of popcorn. It's a nice idea, and it's executed as well as it can be, but since they're so small there's not as satisfying a crunch as there could be. It's noticeable in the taste, and blend in very well with the toffee, but there's just not enough to make this an overall outstanding bar. But while it's not perfect, it's a good addition to an already tasty range, and the toffee alone would make it worth picking up. More Duets please, or even just a Galaxy Toffee...