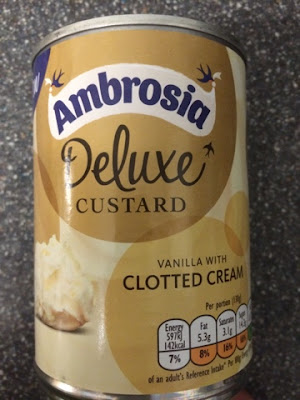 I reviewed Aunt Bessie's frozen apple crumbles yesterday, but I must say I didn't eat them on their own. No, my search for that dessert was spurred by my earlier acquisition of these new tins of custard from Ambrosia. This is "deluxe" custard apparently, available in two differing vanilla flavours. One has clotted cream, the other creamy toffee. Sounded pretty good to me. 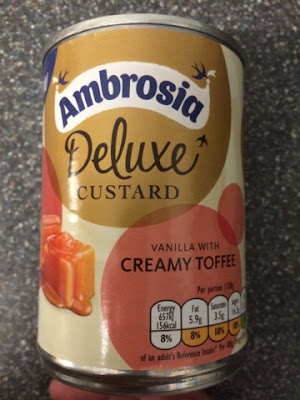 Ambrosia custard is good, so it's a steady base with which to pile on some deluxe ingredients. Both these custards have a bold vanilla flavour at their base, and overall it has a very nice, creamy texture. It's just with the extra bits that they fall a bit flat. The clotted cream and creamy toffee elements aren't really that noticeable. I picked up bits here and there, and while they were alright, they were often overshadowed by the vanilla flavour. These taste fine, perhaps even good, but seeing as these were meant to be "deluxe" they fall somewhat short of the mark, and make for a pretty average custard experience. Worth picking up if you like vanilla in your custard though.