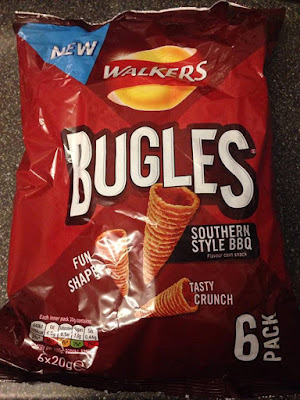 There seem to be a few neat new products lining the crisp aisle now, and I'll be working my way through them over the next few days. The one that grabbed my attention the most, however, was a bit of a throwback, at least as far as I remember. These are Bugles, cone shaped crisps from Walkers, and I'm sure they used to be around when I was a kid, before inexplicably vanishing. They're corn snacks, in the shape of bugles, hence the name. The pack there says they have a "fun shape", but I can't say they instilled me with a sense of childish wonder. They promised me a BBQ flavour though, so I was on board.

It's clear that these are corn snacks, the texture is very corn-like, slightly soft, but it stills has a nice crunch to it. Certainly not as satisfying as a potato crisp, but I'm sure it's easier to make those cone shapes out of corn. As for the flavour, there's a definite BBQ taste to these, but it's not all that strong. It's a sweet, smoky flavour that's actually pretty nice, but the taste of the crisps themselves tends to overwhelm it in some places, and the after taste I was left with was more of corn than BBQ, which is a little disappointing. Still, these aren't awful, I was just hoping for a bit more flavouring. These crisps are nice for a change, but I don't think they'll be taking their place alongside regular Walkers crisps any time soon.