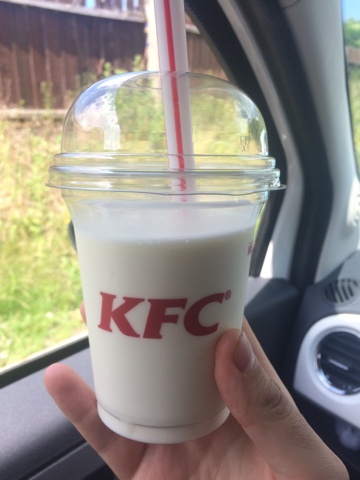 What can calm our nerves in this post-referendum uncertainty? I'm not sure anyone knows the answer to that yet, but yesterday I figured a KFC Krushem would at least do some good. So imagine my horror as I pulled up at the drive through and find that Krushems are no longer on the menu, and in their place is a standard selection of milkshakes. Nothing fancy shoved in them, just vanilla, strawberry and chocolate shakes. Determined not to leave empty handed, I went for the vanilla, 'cause I'm not adverse to a simple vanilla shake at times. I just hoped my despair at the absence of a Krushem would still allow me to form a valid opinion.
This ain't no Krushem, that's for sure. It's the same kind of stuff that they had in the Krushems, just with a distinct lack of chocolate pieces, and without those pieces the consistency of the shake itself is clear. It's not very thick, it's pretty watery in fact, so it's more akin to a Nesquik than a standard fast food ice cream shake. There's a little thickness, sure, but it's just not enough. The vanilla had a nice enough taste to it, so this wasn't a total loss, but I wouldn't call this a good milkshake, in fact it's pretty disappointing. We want our Krushems back. In fact, go back further and revive the Joosters Avalanche, that was the good stuff.
My rating: 1/5
Posted by A Review A Day at 09:26