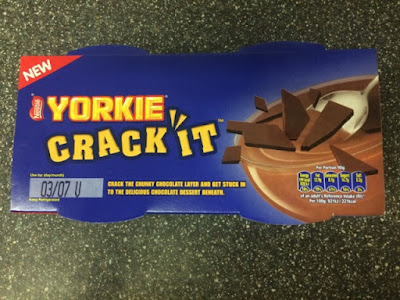 There seems to be a lot of violence encouraged towards our snacks these days. Cadbury want us to smash their chocolate, and don't even get me started on Terry's Chocolate Orange. Now Nestlé want us to carry our aggression over to their desserts, as they invite you to Crack It. Basically there's a chocolate layer on top that you need to break through to get to the other, less solid chocolate underneath. It looks like this: 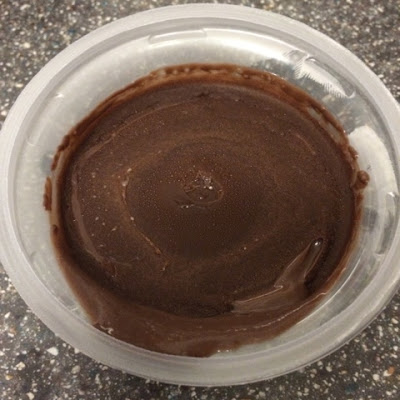 Not the most appetising looking chocolate I've seen, the other stuff is already seeping through. But a hearty smack with the spoon dispersed the disc and left me with a kind of strange mess of solid chocolate and creamy dessert. I wouldn't say this idea is a stroke of genius, but there's some fleeting fun to be had in the cracking. The taste, however, doesn't really live up to it. The chocolate on top is nice, but the way it cracks mostly leaves an outer ring in several large pieces that don't fit in the mouth that well. A bit nit picky I know, they can't help the laws of physics, but it was a minor inconvenience. Besides, the chocolate dessert underneath just isn't all that nice anyway. It doesn't taste awful, but it's less of a creamy dessert and has something of a syrupy texture, and in that sense it does get quite sickly despite being such a small pot. Thankfully the chocolate chunks are there to balance out the flavour a little, but overall I can't say I enjoyed these. I'll look out for the Rolo version in the hopes that the stuff under the disc is nicer, but I'd give these Yorkie ones a miss.