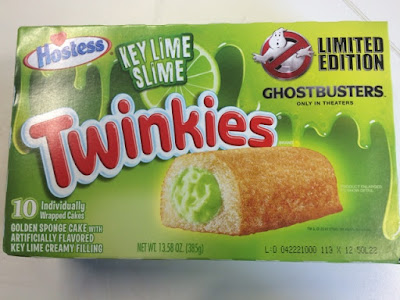 It used to be the case that Twinkies were nowhere to be seen on this side of the Atlantic, but now they're popping up all over the place, along with many other American snacks. It seems we're getting them imported a lot sooner than before too, as evidenced by these special edition Twinkies I picked up in B&M this week. They're promoting the new Ghostbusters movie that's coming out soon, and they've not only gone for a very apt green filling, they've done a flavour to match it as well, a creamy key lime. 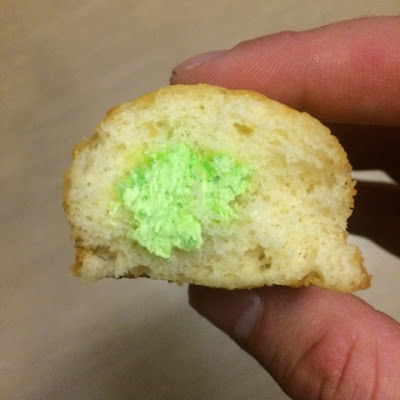 The innards look fantastic, a very bright green that certainly fits with the theme, nothing looks more delicious than ectoplasm, right? As for how it tastes, it's very sweet, and while it does have a lime flavour, and is very creamy, it does taste a little artificial. It's not too bad though, I'd say I might even prefer it to the original filling. But it still has the same old Twinkie cake, and I'm not too fond of that. There's enough filling to overtake the flavour of the cake a little, but it's still not a great sponge, and has a bit of a funny after taste. So all in all, this is only alright. It's worth a go while they're still around though, the filling is pretty good.