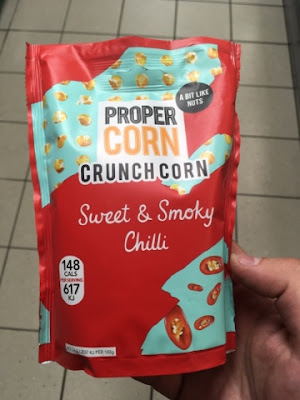 Popcorn has been a big thing in recent years, but apparently it's time to change it up a bit. Why have popcorn when you can have Crunch Corn? It's like popcorn that hasn't quite been popped. Well, not quite completely unpopped, but somewhere in between. "A bit like nuts" reads the packaging, so that'll give you an idea of what to expect. These also come in salt & pepper flavour, and as much as I thought I should try that one for my first Crunch Corn experience, I can't resist the call of the chilli. 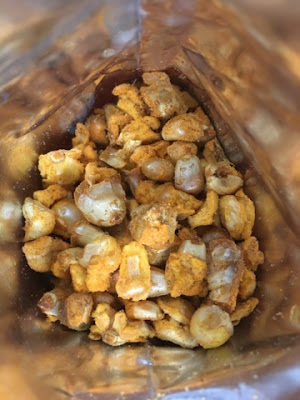 There you have it, some kernels are pretty much unpopped, while the others have all kinds of shapes and sizes. As far as the texture goes, they're pretty crunchy, some more than others. It's clear the popping isn't consistent through the packet, are pretty soft, while others were pretty hard to bite through. On average though, it's a satisfying crunch, and the flavouring is generously spread on top. These are actually pretty spicy, a bold heat with a smoky sweetness. These are probably one of the better chilli snacks I've had recently, and this is an interesting new snack that's worth a try.