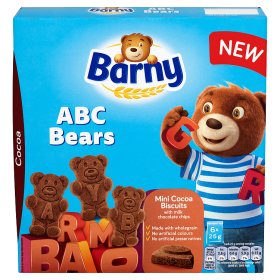 Sometimes my supply of new snacks run dry, and I find myself rooting around in cupboards to find something I haven't eaten before. It's often a fruitless exercise, but it's always worth a try. Today I found a few packs of these ABC Bears from the guys who brought you Barny Bears. They're chocolate biscuits, and the last bastion of hope on the borderline of what is considered acceptable snacks to put in kids' lunchboxes. Also, they have letters on them, which helps the children prepare for Countdown. 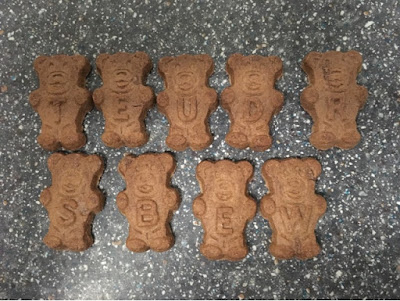 I got "duster", did anyone else do any better? Anyway, these are tiny chocolate biscuits. They pretty much taste like bourbons, but without the filling, and nobody wants that. They're not awful, just quite dry, due to the lack of the aforementioned filling. They taste chocolatey, and they have something of a nice crunch to them, so they're alright for a kid's snack I suppose. They ain't no Iced Gems or Mini Party Rings though.