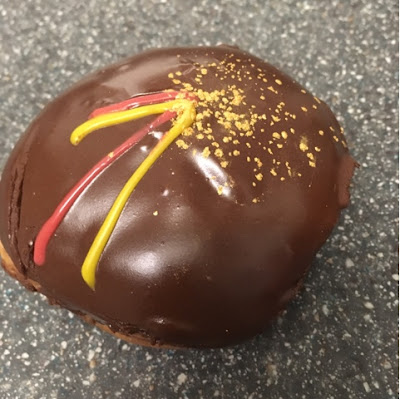 Alongside the awesome S'mores doughnut I reviewed the other day, I also picked this up from the Krispy Kreme cabinet. It's a Chocolate Firecracker, featuring a chilli infused chocolate icing. I love chocolate, I love chilli, and while I'm not completely sure about combining the two, the couple of bars of chilli chocolate I've had aren't all that bad. So a chilli doughnut sounded right up my alley. 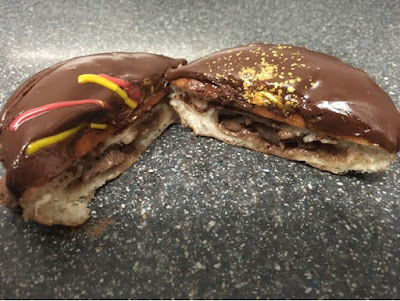 It's a nice touch the the chilli is infused into the icing, it provides a solid coverage of spice, and it is actually pretty hot. I would say almost uncomfortably hot in a way, the icing sort of covers and sticks to the tongue, and lets the chilli go to work. It's a decent heat level, but while it's not outrageously hot, it tends to drown out everything else that's going on in the doughnut. Thankfully, the chocolate truffle centre provides some respite, it's a creamy, cooling filling that helps take the edge off the spice. In the end though, the chilli still wins out, and while it may not be so bad for spice enthusiasts, I can see how this would be way too much for a lot of people. It's a neat idea for a doughnut, but I think they went a bit too far with this one.