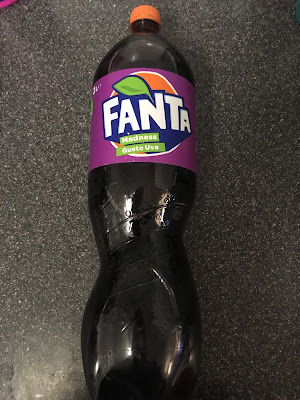 Fanta Madness! Madness, I say! Yes, it's time for another obscurely named foreign Fanta with a mystery flavour. I picked it up from a new deli that's opened up near me. Turns out this one is "red grapes", which is fine by me, I'm a fan of the American grape Fanta, and this was a big old bottle for slightly higher than the price of a can of the US stuff.

Yeah, it's been a while since I've had grape Fanta, but I'm pretty sure this is exactly the same. It has that distinctive grape soda taste, which I'd pretty much describe as "purple". It's dark, very sweet, and only slightly tasting like real grapes. I'm sure for some it would be too much, and I admit it does get a bit sickly after a while. But I like the flavour, it's one of those sweet generic confectionery tastes, like "bubblegum", it's good for a guilty pleasure. So pick up a bottle of Madness, you might be pleasantly surprised. Grape Fanta is good Fanta.