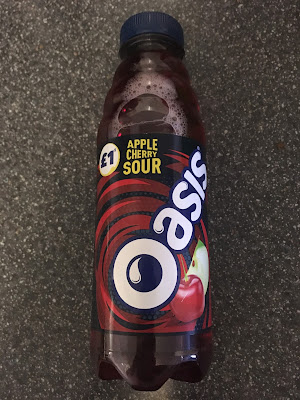 Two new Oasis flavours, now that's something I can get on board with. They're going for something different this time, these new varieties are sour and feature fruity combos. There's apple & kiwi, as well as this apple & cherry. I mean, I would have taken those flavours as they were, but the sour element sounded interesting enough. Also, they're pretty low calorie, so that's a bonus, only 20 calories per bottle. But would that affect the taste?

This is a pretty nice Oasis, the cherry is a nice new addition that gives a nice dark, juicy flavour, which combines pretty well with the apple. It's definitely a sour drink, but I think it might have been better as a regular one. It's pretty satisfying at first, but that tingle on the taste buds soon gives way to something of a chemical taste, it takes away from the refreshing nature of the fruit juice, although I can still taste both elements hanging around in the after taste, so it doesn't ruin it completely. This could have been a pretty amazing bottle, but the sweeteners and the attempt to make it sour drag it down to a pretty mediocre. Worth a try for something different, but I don't see it being added to the permanent lineup.