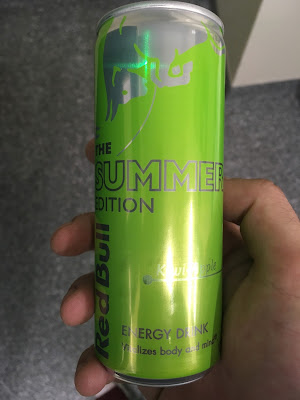 I don't often go for the cans of Red Bull. I know it's good stuff, but Monster is significantly cheaper by volume, and it does the job of perking me up to my satisfaction. One thing I can't resist, however, is a new flavour of Red Bull, so I was suitably excited when I spied this green can across the aisle at Morrisons. It's a "summer" flavour, which equates to kiwi & apple, because they're the go to flavours for summer-themed, green-coloured drinks.

I don't rate kiwi fruits. I don't find them entirely awful, but I think there's nicer stuff out there. I don't understand why so many people are putting it in drinks, but I have to admit it gives a sharp, tropical edge to what could have otherwise been a bland flavour. Having apple as the main flavour provides a sweet, crisp base, on top of which there's a certain tartness that the kiwi provides. It's not too much, so I was pretty fond of this, it's like an apple energy drink with a little twist. It's refreshing, and underneath it all is that classic Red Bull formula for perkiness, it's just a great little drink. More summery tasting than the original, so snatch it up while we're in the season.