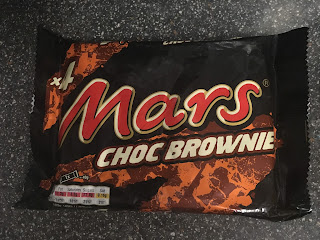 I often wander into Poundland looking for new treats to devour, but a lot of the time the shelves are lined with the same old stuff. If you experience the same, I'd advise to not lose hope, and be vigilant on the way to the till, because it seems that's where they pile all the new stuff in my branch. Take this pack of Mars bars, for example, there were boxes of them stacked nonchalantly in the middle of the queue, I would have walked straight past them if my keen snack detecting eye hadn't been activated. So yeah, chocolate brownie Mars bars, I mean, I can't resist a regular Mars, let alone one that promises brownie too. It seems the title is a little misleading though. I was imagining some form of brownie layer atop the nougat, but it turns out this is just an overall chocolatey Mars, similar to the extra chocolate one that came out a while back. This one differs in that the caramel is "dark", so I was interested to see how this panned out.

The chocolate nougat is great, I can't deny it. Apparently I wasn't a fan of it when the Xtra Choc bar came out, but despite it indeed being somewhat sickly, it's an overall great chocolate experience. The caramel is definitely dark, and is a bit much when taken on its own, but when blended with the nougat, it does create something of a brownie experience. Obviously nowhere near as good as the real thing, and the difference in texture between actual brownie and brownie Mars sort of detracts from the experience, but this is still one very tasty bar. Sickly, yes, unhealthy, yes, but also delicious.