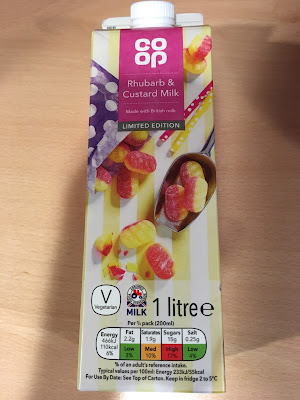 Rhubarb & custard milk, why not? I heard about this a while ago, but it's taken me a while, and a few Co-Ops to actually find some. Either not many branches were taking the risk of stocking this, or it was so popular it was sold out everywhere I went. I'll probably go with the former. So yeah, milk flavoured like those classic sweets. I had faith it could work, they put everything into milkshakes these days.

You know what, I was expecting this to be some kind of awful, but I ended up quite fond of it. It's a bit of an odd taste at first, a nice hint of that classic rhubarb & custard flavour, but with an undertone of milkiness. It's very creamy and sweet, but as I drank more the taste grew on me. Definitely too much to drink in one go, but pretty tasty overall. I feel this would have suffered more as a thicker shake, but despite the lightness of the milk itself it does get a little sickly. Still, a unique twist on flavoured milk, and worth grabbing if you can find a carton.