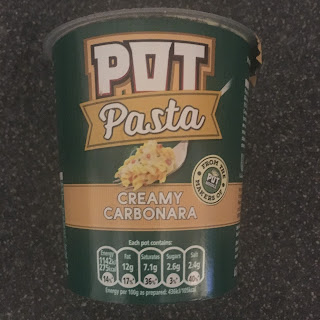 Whether you love 'em or hate 'em, Pot Noodles are a national institution. The ultimate in quick fix lunch options (and maybe dinner?), Pot Noodles vary in sizes, spiciness and flavours, but one thing remains consistent, and that's their... noodliness. But no more, because now you can go for slightly finer dining with the Pot Pasta. It's like a Pot Noodle, but instead of noodles, it's pasta. These come in a few interesting varieties, emulating classic pasta dishes. There's broccoli, bolognese, and this carbonara flavour, which is the one I picked up for my lonely Monday night dinner.

I can't say I eat a lot of Pot Noodles, so I was a little disappointed with how little stuff there was inside this pot. It did expand once I filled it up with water, so maybe I was just being picky. But that's not the only thing that disappointed me. The sauce is the main thing, it's not so much creamy as it is watery, making the whole thing a lot more sloppy than I was anticipating. I know I did it right, because there's a line to fill the water to. I know I'm not a rocket scientist, but I'm pretty sure I can prepare a pot of pasta. Thankfully, it's not all bad, it's cheesy enough, and while the ham isn't particularly well represented, there's a little meatiness to be had here. The pasta itself is a welcome change from the "classic" noodles, but while it's filling, it's not particularly great quality.

The carbonara Pot Pasta is not for me. I suppose it's a nice enough change from a Pot Noodle, but I don't think that's really saying much. Maybe I'll try out the bolognese flavour next time, but this one is just not great. A creamier sauce may have saved it a little, but I'm not on board with a watery pasta pot.