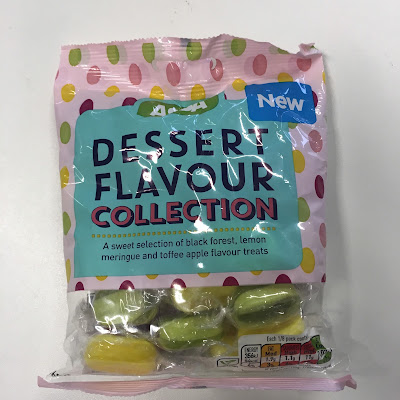 Asda are really on board with the dessert confectionery lately. I've tried the cables, and now I've moved on to the boiled sweets. This one features the return of the lemon meringue, but also includes toffee apple and black forest. I figured they were more winter desserts, but hey, any dessert is good for me.

I thought these would be your run of the mill flavoured boiled sweets, but I was wrong. The lemon meringue is probably the most regular of all of these, it's a nice tart sweet, and inside there's a somewhat creamy tasting filling, and combined the two parts do bear a resemblance to lemon meringue, it's pretty nice. The toffee apple is interesting, with a sweet, and slightly spiced apple outer that melts away to a chewy toffee centre. The combination of apple, cinnamon and toffee is pretty nice, but it's a little heavy on the spice, and the boiled sweet/toffee combo takes a bit of getting used to.

That's nothing compared to the black forest though. What starts out as a cherry sweet quickly turns far more odd, at its centre lies dark chocolate. It's like a mix between a glacier fruit and a chocolate eclair, and I really don't know how I feel about it. At first I was disgusted at the very idea of it, but as I ate a few more it grew on me, the flavours work quite well together. That doesn't mean I'm a fan now, it's a very acquired taste and I won't be desperate to grab another bag of these. This bag of sweets has some interesting ideas which aren't too badly executed, worth trying if you want something different, but not a classic.