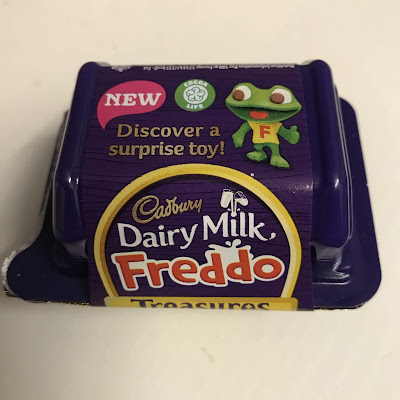 For those of you with children who have spent countless hours watching YouTube videos of people opening "surprise eggs", this is one thing you won't be surprised about. Cadbury have taken this Easter as an opportunity to get in on that lucrative surprise toy chocolate market with Freddo Treasures, a plastic treasure chest that contains chocolate and a toy!

I mean, Freddo is there on the label, but he's nowhere to be found inside. What you get is two foil sealed compartments, one of which contains that elusive toy, and one of which contains 14 Buttons. Not even Giant Buttons, just 14 regular, tiny Buttons. I mean, we all know Buttons are great, but what's in here amounts to a small mouthful. As for the toy, the one I got in mine was a spinning top. That's Christmas cracker fodder guys, where's the good stuff? The appeal of Kinder Surprise has worn off over the years, I must admit, but getting a few pieces to put together at least injected a little fun into my day, and finding those rare porcelain pieces was quite a thrill. With Freddo, however, one measly spin and I was done with my treasure, and all that was left was an empty plastic shell and a faint trace of chocolate on my lips. Maybe I've lost that child-like wonder, but really I don't see how this will stand up to the big boys. It's a pretty disappointing effort from those Cadbury giants.