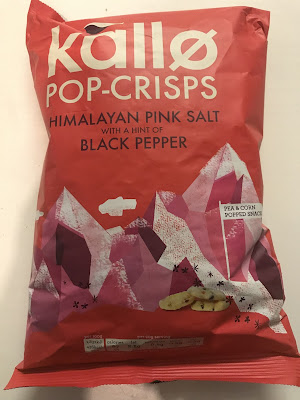 Here's an interesting bag of crisps I picked up cheap from Home Bargains earlier, I've seen Kallo rice cakes before, but it turns out they've dipped into the popped crisp market too. Here we have "Himalayan pink salt with a hint of black pepper", which basically means salt and pepper. I can't say I know what makes pink salt from the Himalayas much different from any other salt, but these are some salty crisps either way. A good balance of salt and pepper, and the popped nature of the crisps allows for a generous coverage of flavour. I guess I did pick up a little something different in the salt part, but that was probably just my mind running away with things, upon eating a few more it just seemed more like the combination of salt, pepper and crisp. So as fancy as that salt sounds, it's still just salt. Not that there's anything wrong with that, these crisps are tasty and have a lovely texture too. Worth a try.