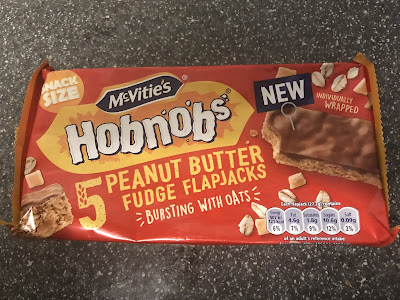 Even the name was music to my ears, peanut butter fudge flapjacks. The Hobnobs part was just the icing on top. Yes, these caught my eye immediately, and I was really hoping I wouldn't be disappointed. I mean, I've never seen McVitie's tackle the peanut butter market, but I have to say they've done a pretty decent job here. These little chocolate covered oaty flapjacks have quite a bit of flavour packed in. Chocolate and peanut butter is a great combo anyway, but the oats add a nice substantial layer that packs in a lot of the flavour. The peanut butter is noticeable, but not too sickly, though I will say the fudge part isn't particularly well represented, they didn't need to stick that in the title. Still, these are a lovely little snack, and I found it hard to eat just one. Peanut butter and Hobnobs, a great combination. I might even end up spreading it on my biscuits.