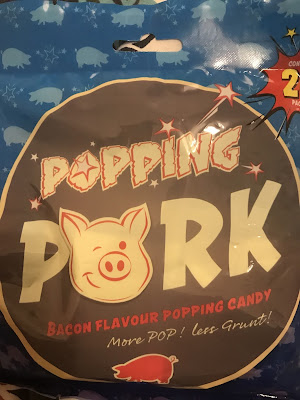 Now for the latest episode of “Things Nobody Asked For”, featuring Popping Pork! I found this suspicious package alone on a clip strip at Poundland, and upon scanning it wasn’t even a pound, it’s was like 45p. Very odd, but then again everything about this is odd. I wouldn’t have thought bacon flavoured popping candy would be at the top of anyone’s list, but I guess e do live in an age where all manner of bacon related product exist, so I figured I’d try this one out for you guys.

Surprisingly, it’s not bad. The smell upon opening the pack is very much like a bag of bacon crisps, and the flavour is pretty much the same too. A definite meaty taste, with a bit of sweetness thrown in from the candy itself. I wouldn’t say it’s particularly nice, but it does do what it says on the packet. This is popping candy that tastes like bacon, and it has a satisfying pop to it as well. Unfortunately, the after taste isn’t too great, but it’s all still better than I thought it would be. An interesting bacon themed product.