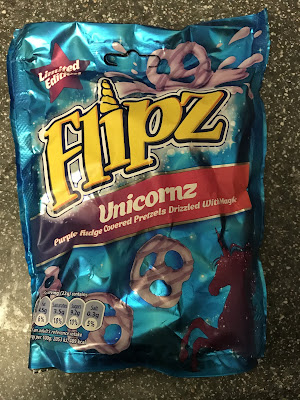 The unicorn craze is now available in pretzel form. Pretty late to the unicorn party, we have this variety of Flipz that has a tenuous link to the mythical animal in that they are purple. Unicorns are white, man. Your fudge pretzels were white anyway, you could have just put a horn on the packet. These things are pretty much the same taste wise as the regular white fudge ones, which in my opinion pales in comparison to the chocolate flavour. It’s a thick, slightly milky tasting coating which is a little sickly, with a pretty decent crunchy, salty pretzel underneath. I got a little hint of fruitiness in the flavour, but that’s probably ‘cause my brain was trying to justify the purple. All in all it’s a pretty mediocre variation on a pretzel that wasn’t too great to start with. I definitely think something has been lost in translation bringing these Flipz over to the UK.