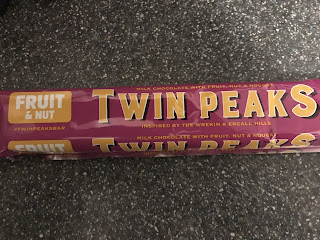 After releasing their budget Toblerone a while back, Poundland have released a couple of new varieties. Here we have a fruit and nut version, which is obviously a rip off of the Toblerone of the same nutty, raisiny nature. The shape of the bar has changed somewhat, it’s a bit flatter, with alternating, zig zag leaky bits that I guess sort of emulate mountains? I dunno, seems a bit of a cop out, but it’s still only £1 so it’s not awful. Unfortunately the taste isn’t all that great. The chocolate is passable, creamy enough, but does leave a bit of a bad aftertaste. The fruit and nut chunks are a bit small and don’t add a lot to the overall flavour. Pretty much a mediocre version of Toblerone all round. Not too bad for a pound, but you know there’s better stuff out there.