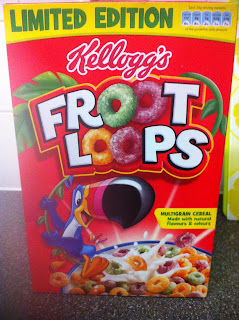 Oh hell yes, Kellogg's. You're finally making a good move. American cereals are my most sought after food. Imports are pretty expensive, £8-9 a box. Outrageous. So imagine my joy when stumbling into the cereal aisle at Tesco to find these beauties staring at me. Despite being a fan of Lucky Charms, Trix, Cap'n Crunch and a few others, I've never tried Froot Loops. It's the gaping hole in my American cereal knowledge, so I was satisfied to find them at a reasonable price.

Froot loops are just that. Fruity loops. The box doesn't quite state the flavours, but we've got orange, green and purple loops, so I'll say orange, apple and grape. If you've never had American grape, in the form of cereal, sweet or soda, it's quite an experience. It tastes nothing like grape and a lot like additives, but it's truly awesome.

Sadly, this cereal lacks that punch, and in fact all the flavours are a little bland. There's definitely a hint of something fruity in there, but it's not the assault on your taste buds that Trix gives you. I wondered if this was how it was meant to be, but realised it couldn't. It just didn't seem right. Then I saw this: 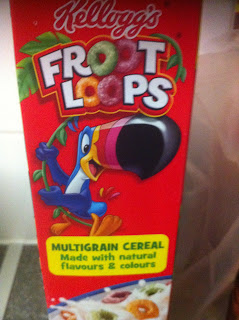 Made with natural flavours and colours. Only natural? In American they have big labels slapped on their foods proudly stating that they're made with natural and artificial flavours and colours (or flavors and colors if you will). But that's the way it is in this country. Get rid of the artificial stuff, get rid of the awesome flavour. Well I say no, that's not good enough. I want my sugary, sickly cereal, and Kellogg's has delivered me a bland alternative.

EDIT: I've had a nagging feeling in my mind ever since I wrote this review. A feeling that I was way too harsh. I've had several more bowls of Froot Loops since, and I must say they're not too bad. To dismiss them with a 1/5 based on the fact that they're not chock full of sickly flavour is a bit short sighted, especially since I've never actually tried the American version. I just chowed down on these, and I could definitely taste a bit of that good old American grape flavouring. Not to mention the loops are quite chunky and fulfilling. So yes, I take it back. I like this cereal, and I would probably buy it again. I just had a bad experience, I was angry, alright?! Here's to giving cereals the second chance they all deserve.