While pouring my kids their cereal, and lamenting the unexplained disappearance of Professor Weeto, I noticed that instead the cereal wants me to play this fancy new "Moustache Combat" game on their website. I say noticed, but the box tells you to play on every single side but the bottom. But hell, I figured I'd give it a go, what's the worst that could happen, apart from losing an undetermined amount of time on a shitty flash game? 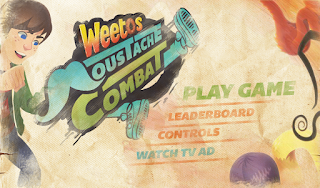 So here it is, Weetos Moustache Combat. The very premise of this game was somewhat baffling to me.
I have no idea what Weetos have to do with moustaches, now was there any explanation as to why these moustaches need to be dealt with in combat. I tried viewing the attached TV ad, but all that seems to tell me is I should be carrying around surplus portions of Weetos in random containers, so that I can eat them, without milk, at regular intervals, to give me the strength to fend off attacks from rogue disembodied moustaches. Man, school has gotten a lot tougher since I was a kid.

Anyway, onto the game. You play as that generic kid up there, and your goal is to kick and punch the shit out of moustaches, and somehow that will make you want to eat Weetos.


It's basically Mortal Kombat for kids. Your standard fighting style game. A punches, S kicks, D blocks, and there are some rudimentary combos for you to pull off, but really you can just win by kicking all the time, because most of these moustaches are too small to be affected by your high punches. I say Mortal Kombat because during the final KO of each moustache the screen says "Finish Him", and prompts you to enter a string of arrows and letters. The result is a lacklustre flurry of punches and kicks, and you gain nothing from it, but I suppose it's a nice touch. 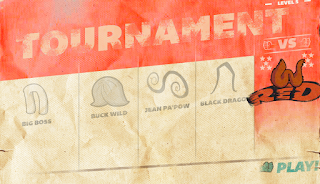 Here's the roster of hairy opponents. They start off pretty easy, even the Dhal Sim-esque Jean Pa'Pow didn't pose much of a threat. But by the time you get to the Chinese style Black Dragon 'tache things get a little tricky. The real challenge is the final opponent, Red. This moustache is a massive, lumbering bastard who will decimate you in seconds if you're not good at blocking and jumping around.

It actually took me a good few tries to finally beat this guy, and it was mostly accomplished by jumping all the time and getting cheap kicks in where I could. Thankfully, if you land enough hits and survive for long enough, a Weeto materialises in the top left, and once it's complete you can press W to restore your health. A cheap mechanic, but at least they're being consistent with their nonsensical TV ad.

After spending a good quarter of an hour kicking the crap out of moustaches, I have to say it's not a bad little game. The visuals and music are quite nice, and it poses a little bit of a challenge. I just don't understand why this game exists. It does little to promote the tastiness of the cereal, which is a selling point in its own right. I guess I'm out of touch with the kids these days, and these marketing people know what they're doing. Or maybe I just long for Professor Weeto.