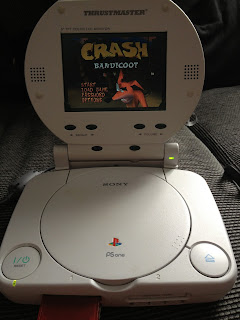 The constant re-releasing of consoles as a slimmer version may seem unnecessarily abundant nowadays, but it's been going on for quite a while. 1996 brought us the Game Boy Pocket, and in the year 2000 we were treated to the PSOne, a smaller, significantly more curvy Playstation. Sony probably would have been fine just leaving it at that, but the PSOne had a very interesting add-on, in the form of an attachable LCD screen. I don't have the official one, but I managed to find a dubiously named third party screen, the Thrustmaster.

I'm an adult now, which means I can play my Playstation on my big TV whenever I want, but I would have gone absolutely crazy if I got one of these when I was a kid. Not only can you plug it into any wall socket to have a nice little personal Playstation space, but it comes with a power adaptor so you can play it in the car. I used to have to settle for my chunky old Game Boy, being forced to turn it off when it got dark because the thing had no backlight. But this screen unlocks access to the entirety of the Playstation library, on the go. Sure, we have many better things nowadays, smart phones, the 3DS, the PS Vita, but there's something quite wonderful about the range of games available on the Playstation, many classics that today's games just don't compare to. If I go on a long car journey in the near future, I know what I'll take.

So yes, the idea is solid, but what about the execution? I'm quite the quality-phile, so I was a little dubious about playing games on a 5" screen. Thankfully I was wrong, because the visual quality is pretty great. Brightness levels can be adjusted to your liking, and the sound comes through crisp and clean. This screen is a fantastic piece of kit that was perhaps a little too ahead of its time. If you can find one anywhere I'd definitely suggest snapping it up.