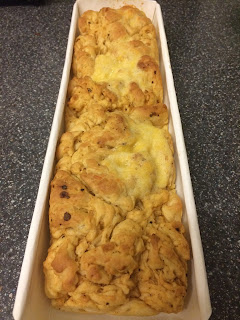 I usually blaze through the bread aisles of the supermarket, picking up my regular loaf and not paying the smallest bit of attention to different doughy varieties. But there are so many good breads out there, and I'm making it my mission to try some out, even though eating a whole load of bread is very bad for you. But I'll certainly make an exception if you put chillies in your bread, as is the case with the jalapeño bread from Asda. It implies in the name that it's for sharing, but since no one else in my family is keen on spice, I kept it all for myself.

It's pretty easy to bake, just pop it in the oven for eight minutes and you're good to go, straight from the packaging. The result is a pretty fine piece of bread. It has a lovely crisp exterior, giving way to a soft and chewy dough inside. It is perhaps a little stodgy, but it's a lump of bread, so I can't hold that against it. What makes this good is the jalapeños spread throughout. There aren't any concentrated chunks of spice, just an ever present heat that provides a little bit of flavour. The cheese is nicely executed as well. Instead of being a mere lump of cheese on top, it's given in the form of a cheese spread, which melts quite nicely and permeates some way through the bread itself, providing a cheesy taste throughout rather than in a few patches. I was pretty impressed with this bread, it could probably do with a bit more cheese around the outside, but I had a good time eating it. I'll be on the lookout for any other flavours next time I'm hanging around the bread.