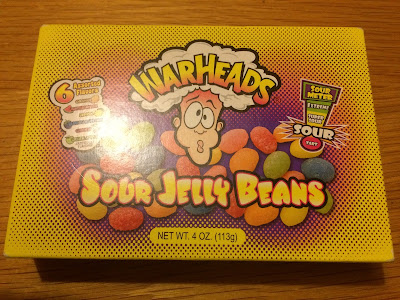 I reviewed the Warheads Chewy Cubes the other day, and was less than impressed. But I also picked up these sour jelly beans at the same time, and they're one step up on the sour meter, so hopefully they would fare better with me. These come in six flavours, like the cubes, but some are slightly different. There's just plain old cherry instead of black cherry, and the strawberry has been swapped out for lemon.

These are more sour, I'll give them that, but they're nothing spectacular. There are two whole more scales to get through on the meter though, so I'll forgive them for not leaving my face inverted. As for the flavours, they're hit and miss. Some are quite bland and artificial tasting, such as the apple and cherry. The watermelon and lemon are pretty damn good, but the best are the orange and blue raspberry, which both contain very bold, tasty flavours while helping to accentuate the sourness. So they're not particularly great, but there are more good ones than bad, so they're not a lost cause. They're definitely better than the Sour Patch Jelly Beans, so if you've got a very specific hankering for sour jelly beans, these are your best bet (if Jelly Belly aren't available of course).