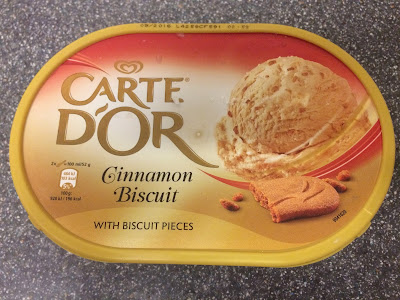 I reignited my love for Carte D'or a few days ago, and since then I went back to peruse the ice creams they have on offer. I settled on this cinnamon biscuit variety, having been mightily impressed with Ben & Jerry's new cinnamon offering. This version is pretty much in the same vein, it's a cinnamon biscuit flavour ice cream with pieces of cinnamon biscuit throughout.

It sounds like a lot of cinnamon, but the flavour thankfully isn't too strong. It's undeniably cinnamon, but the ice cream itself is very light and creamy, with just a hint of spice that manifests itself as a nice, gentle heat. There's also a hint of the biscuit flavouring in the ice cream, which makes for a slightly fuller flavour, and overall it's very tasty and moreish. The main biscuit element comes in the form of the pieces scattered throughout. They don't really add much to the flavour, since they taste the same as the ice cream, but they do provide a change in texture. Unfortunately the texture could have been better. With biscuit pieces I was expecting a nice crunch, but these chunks are very soft, almost bordering on tasting soggy. Still, it's not that bad, it's still nice to have a bit of biscuit spread throughout the tub, and the overall flavour isn't affected. This may not quite rival Ben & Jerry's, but it's still a very nice ice cream.