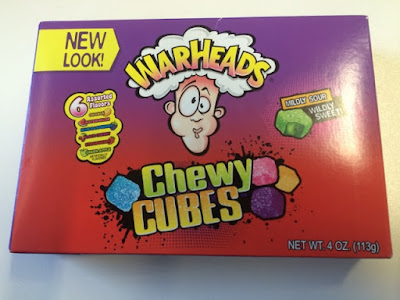 I remember getting Warheads out of sweet machines as a kid. The sour ones blew my head off, and the hot ones were entirely unpleasant. But then they disappeared, and apparently they've only existed outside the UK. So I was happy to grab a box of these sour cubes when I saw them in Poundworld.

These come in six flavours, from the standard orange and apple to the more interesting watermelon and blue raspberry. There's nothing particularly wrong with the flavours, but there's nothing gray about them either. The worst thing is they're not that strong, and for the size of the cubes I was expecting more flavour. Instead they're pretty bland, and the chewiness means they last a fair while. Even the sourness isn't done right, I know the box says they're "mildly sour" but I often couldn't taste any hint of sourness at all. So while these cubes are definitely chewy, and there's some amount of nice fruity flavour in there, they're not particularly nice. I'd give these a miss.