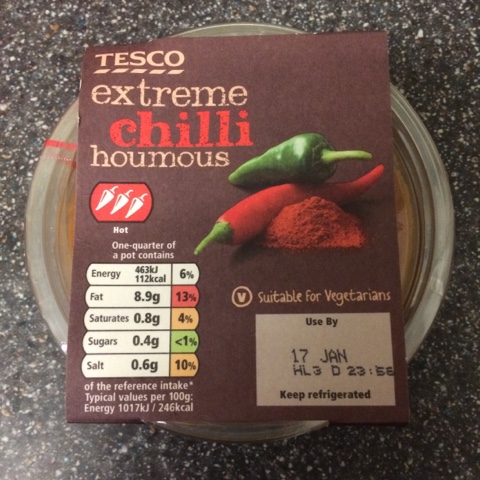 Houmous is great, a tasty treat to dip all manner of food in. But have you ever wanted a houmous that would blow your head off? Tesco thinks you have, because they've brought out an extreme chilli houmous. I didn't know I wanted it until I saw it, but I quickly snagged it up.
This is a houmous mixed with red chilli purée and jalapeños, and it shows. It's quite an intense heat, not awful, but it's the defining element of the houmous. Underneath there's a nicely textured houmous that goes some way to taking the heat off, so it's still a nice pot to dip your pitta in, but the heat did take over quite a bit as I made my way through. As someone who loves spice, it wasn't so bad, but this could probably do with a bit less chilli and a bit more houmous. It does live up to its name though.
My rating: 4/5
Posted by A Review A Day at 13:44