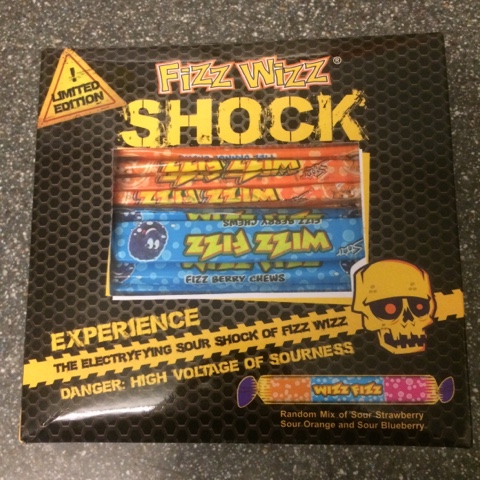 I like to pop into the 99p shop in town to see if any interesting products have popped up, and on my last visit I found several boxes of Fizz Wizz, which are basically sweet strips in the same shape of those Maoam sticks. There were several varieties, but this black box interested me the most, offering me extreme sourness. They come in three flavours: Orange, strawberry and blueberry.
As I always do, I started out with my least favourite colour and devoured and orange one. I was not impressed to start with. First of all, the texture is not the same as a Maoam, it's somewhat more crumbly, less chewy, although it retains some chewiness. It's hard to describe, and it took some getting used to, but after a few sticks I figured it wasn't so bad, just different. The orange flavour isn't that great, and it doesn't have much of a sour taste to it either. But as I moved onto the others I was more impressed. The strawberry has a nice flavour, and is actually very sour, while the blueberry tastes very nice indeed, despite lacking a little bit on the sour front. It's nice to see a blue sweet flavoured with blueberry instead of the standard blue raspberry, so that elevated my opinion of these. Overall then, these are some pretty good sweets. The orange may not be great, but the other two are tasty, and a box of them for 99p is not bad at all.
My rating: 4/5
Posted by A Review A Day at 14:21