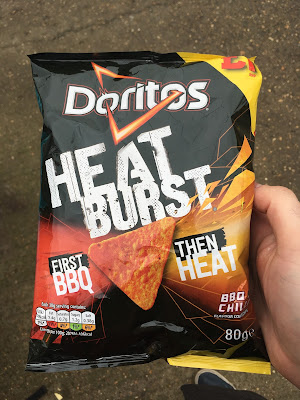 After trying out the chipotle cream version of these Heat Burst Doritos the other day, I picked up this smaller version of the BBQ variety from a local newsagent. I wasn't sold on the flavour changing chips from the last bag, seeing as the chilli overtook all the other flavours, but I had faith that these could be different.

Turns out these chips are a lot more balanced. The initial BBQ flavour is bold and smoky, similar to the BBQ Rib Doritos, but, you know, without the rib. The chilli kicks in soon enough, but the flavourings seem to work well together, the smokiness is retained while the heat kicks in to a nice level. I think the chipotle cream doesn't work as well because the first flavour already has spice, only to be overwhelmed by a stronger one. In this bag they're both different enough to work, and I must say they're very tasty. Good BBQ, great chilli, awesome heat burst.